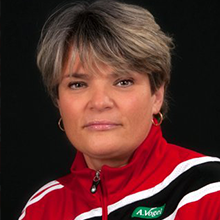 Sylvie was introduced to wheelchair sports by her physiotherapist and originally started in wheelchair basketball but then switched to fencing. She always wanted to try it out, but had to make a choice between fencing and archery. Fencing won and she has been fencing since 1997. Sylvie enjoys the sport so much that she has opened a fencing school in her region to inspire a new generation of athletes to give fencing a try. She believes that you need to keep in shape at any age because a sound mind in a sound body takes you far in life and in sports.

Sylvie is the Pan Am Champion at the epee since 1999. Her sporting philosophy is : ” Success is the sum of small efforts, repeated day in and day out ” (Robert Collier). Her favourite quote is: “Blessed is the man who, having nothing to say, abstains from giving wordy evidence of the fact “.

For the upcoming year, her goal is to improve her international ranking and be among the top 5 fencers in the world and win a medal at the Olympic Games in London 2012.