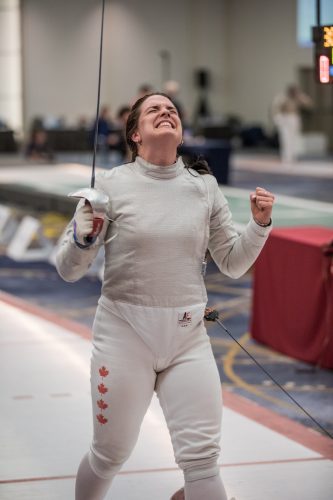 Individual Competition has come to an end at the 2019 Senior Pan American Fencing Championships in Toronto, Ontario and Canada added another medal to its tally for a total of five medals.  The zone championship is an important event in the Tokyo 2020 Olympic qualification process.

Canada’s Gabriella Page (Blainville, QC) completed a great day of competition to finish with a bronze medal.  Page had a perfect five wins and zero losses in poules and was seeded second overall going into the elimination round, earning a bye to the top 16’s.  There she faced Natalia Botello from Mexico, gold medalist at the 2017 Junior World Championships. Page came away with the win by a score of 15-9. In the quarter-finals, Page defeated Valentin from the Dominican Republic a resounding 15-5 to a earn a place in the medal rounds.

Page faced USA’s Mariel Zagunis in the semi-finals, gold medalist at two Olympic Games with multiple World Championship and World Cup medals and who is making her return to fencing following a maternity leave.  It was a very close bout with the lead seesawing between both athletes, but in the end Zagunis won 15-13 to give Gabriella Page a bronze medal.

Canada finishes the Individual competition with a total of five medals, including one silver and four bronze:

Other top 16 results from individual competition include:

Team competition is underway today through July 2nd with Women’s Foil and Men’s Sabre in action today at the Delta Toronto Airport Hotel and Conference Centre.