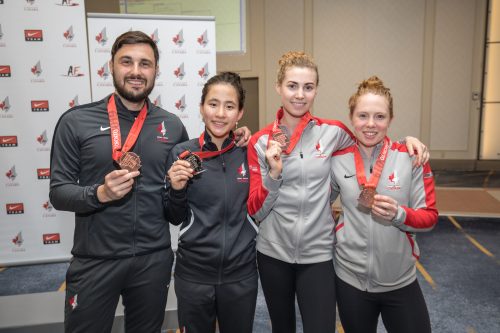 Twenty-seven countries from the Americas are in Toronto this week for the 2019 Senior Pan American Fencing Championships, an important zone qualifying event for the 2020 Tokyo Olympic Games.

Canada came out strong on day one of competition with seven of eight athletes advancing to the quarter-finals.  Canada’s Women’s Foil Team had three athletes in the semi-finals. Jessica Guo (Toronto, ON) came away with a silver medal after losing in overtime to USA’s Nicole Ross by a score of 11-10 in the final.  Guo defeated fellow Canadian Kelleigh Ryan (Ottawa, ON) 15-10 in the semi-finals which gave Ryan a bronze medal.  Eleanor Harvey (Hamilton, ON) lost her semi-final bout in overtime against USA’s Nicole Ross by a score of 6-5 to finish with Canada’s second bronze medal. Canada won three of the four medals up for grabs in women’s foil to almost sweep the podium and Alanna Goldie (Calgary, AB) finished 11th overall.

“I was very proud to see the whole team – athletes, coaches, and support team come out to perform in one of the most important events in the Olympic qualifying cycle,” said Paul ApSimon, Head Coach of Canada’s Women’s Foil Program from Ottawa, ON. “Yesterday was a great indicator that the program is heading in the right direction and we look forward to continuing this progress through to a successful run at the Tokyo Olympic Games.”

Canada’s Men’s Sabre athletes were also in action yesterday with all four athletes advancing to the quarter-finals. 2016 Olympian Joseph Polossifakis (Laval, QC) made it to the podium for Canada.  Polossifakis defeated teammate Shaul Gordon (Montreal, QC) 15-10 in the quarter-finals to advance to the semi-finals against USA’s Eli Dershwitz, ranked number one in the world in men’s sabre.  Polossifakis battled hard but lost 15-10 to take home a bronze medal for Canada. Shaul Gordon, Fares Arfa (Laval Quebec) and Marc Gelinas (Blainville, QC) finished 5th, 6th and 7th overall.

Competition continues today with Men’s Foil and Women’s Epee in action.  Spectators are welcome and entry is free. The full schedule and details can be found on the CFF website at: http://fencing.ca/event/2019-senior-pan-american-championships/  The event will also feature live results and streaming, with links posted on the website and photos on the CFF Facebook page.