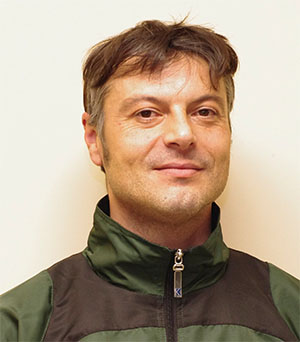 For the first time in its forty-three year history, the provincial fencing association of New Brunswick (FENB) is drawing on the
expertise of a full time fencing master. This position became a reality because the provincial government created a fund to help
sports in New Brunswick hire full time professional coaches. The new provincial coach, Xavier Boulet, arrived in Fredericton in late
October with a smile, an English/French dictionary, and a vision of an exciting future for New Brunswick fencing.


Boulet grew up in Privas, Ardeche, France where he began fencing at eight years old. When he was fifteen, he began competing on the Senior World Cup Circuit, the highest international level other than World Championships and Olympics. Boulet loved fencing, but it was only a hobby while he attended university in Grenoble. After graduation, he worked in business but Boulet was unsatisfied and needed more of a challenge. Determined to do something new, he moved back to Privas. When he learned that the coach at his fencing club was retiring, Boulet decided to get his coaching degree and coach at his home club. With Boulet’s determination and vision, his club grew from about 40 members to about 100 members with a new training space that was twice as large. At this time, one of Boulet’s students was wheelchair fencer Patricia Picot, a triple medallist in the European Wheelchair Fencing Championships. In 2009, Boulet ventured to Switzerland where he was a club coach for three years. In 2010, keeping up his own athletic skills, he was a member of the bronze medal teams in foil and epee at the World Fencing Masters Championships.


With the arrival of Boulet, FENB Executive Director, Barbara Daniel says: “A lot of expectation is placed on our new provincial coach. The primary aim is to see an increased number of New Brunswick fencers achieve success in national level competitions. As a side benefit, the personal coaches who have been working with our fencers over many years will have a new mentor. We also want to see an increase in the number and skill level of referees, higher retention rates of fencers, and improved access to fencing specific training facilities.” Currently there are about 200 fencing members in New Brunswick. Boulet is based at the Damocles Club in Fredericton, the largest club in the province. In addition to fencers from this club, the core training group includes fencers from Saint John and Moncton. His current focus is to build the New Brunswick team for the 2013 Canada Games which will take place next August in Sherbrooke, Quebec.