She made winning look easy yesterday at the cadet (under 17) world fencing championships in Dubai, dominating her opponents in nearly every match. But her passionate response as she landed the last touch made it clear how hard she had worked for this victory.

She was fully aware of the effect her victory had on the Canadians watching her. “ I even made our coach cry a bit,” she said smiling. (Alex Martin, the Canadian Senior Women’s Coach was on piste, assisting Alice Lu, the Junior National Coach. Jin Ko and Huahua Li, Jessica’s personal coaches, were cheering from home.)

Becoming a champion at such a young age could be over whelming but Jessica faces expectations with calm and reason. “Today I was focused from the first point but I didn’t really set too strong a goal for this competition. I kept telling myself, “ I want this but I don’t need it’.”

That mental balance, rarely seen in athletes twice her age, gave her an advantage: adaptability and determination, two qualities needed to win in fencing.

Jessica used that determination to turn around her disappointing fifth in the junior (Under 20) event on the previous day. “It made me more ready… I kept saying ‘I got this!’ I repeated it until I believed it.”

Not much can slow down this young, cheerful champion. She had no complaints about competing three days in a row, barely having time to sleep, in between jet-lag, the excitement of winning, and the cups of coffee.

It’s a slow pace that annoys Jessica. “I hate the breaks in between the matches, I never know what to do.”

Considering her highly-paced teenage life, perhaps those competition pauses where she loves hanging out and laughing with her teammates are important, or as Jessica might put it, “I want this but, ok, I guess I need it.”

Jessica is based out of the Huahua Fencing Club in Markham Ontario. This year she finished 1st in cadet women’s foil, and 5th in junior women’s foil, and led Canada to their 5th place result in the team event, only losing to the gold medal-winning American team. She was a member of the 5th place foil team at the Tokyo Olympic Games last summer. Jessica was the gold medal winner in the 2021 cadet world championships and bronze medalist in the 2021 junior world championships. 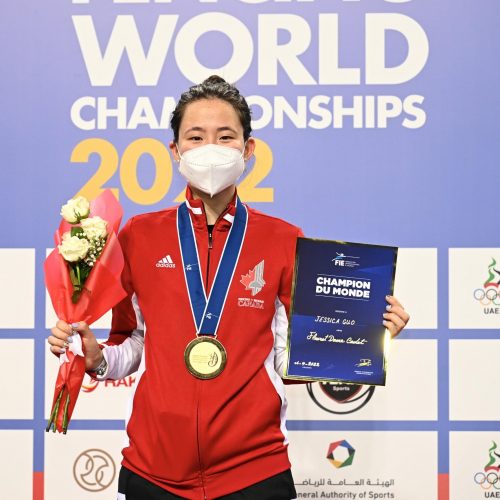 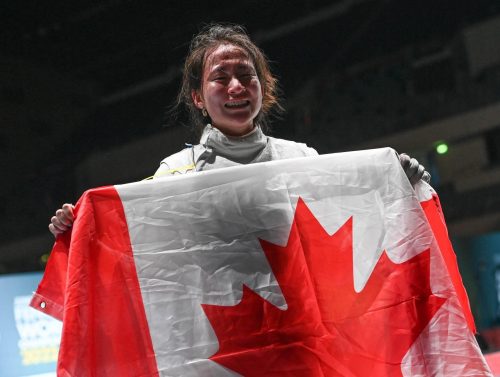 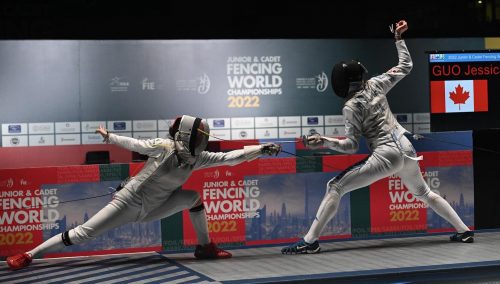